I was initially planning to leave the camper on the back of the truck all fishing season. It recently occurred to me that that will be a huge pain in the ass. Most of the season I will be camping a few miles away from the boat ramp. This means every morning I would have to lower the roof on the camper, unhook power, etc all before I head to the lake. This would not be much fun at 5:30am. Instead I have decided to just take the camper off the truck when I first get to the site. Most of the time I will be staying at a site for two weeks, so taking off and loading the camper once per two weeks is not a big deal.

To help stabilize and support the camper when it is off the truck I bought some jacks and stable sticks. Diane and I tried them out at Chatfield Saturday. The camper was very stable, even when we were in the cab over sleeping. Getting the camper back on the truck was not too hard either. My new bumper camera setup made getting the camper centered pretty easy. The only thing that kind of sucked was not having electric jacks. I had to use my drill to control the jacks and that make the whole process a bit slow. 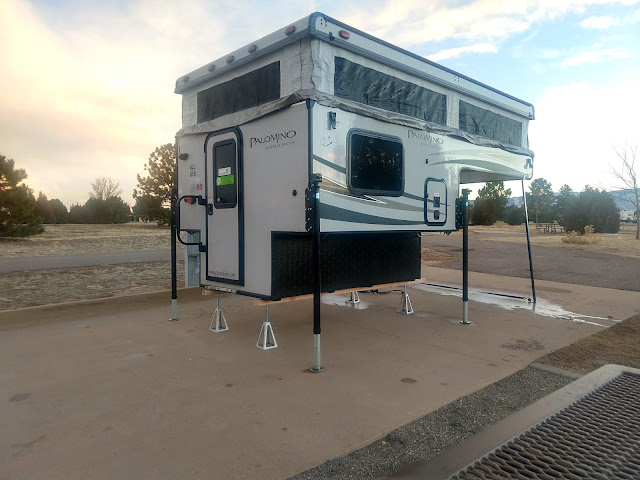