Zeroing in on the biggins

About 3 years ago I watched a video with Aaron Wiebe and Jon B. fishing for giant pike on the fly. It is an amazing video and really got me all gassed up on catching a big pike. That video was actually my motivation for taking up fly fishing.

The next couple of years I managed a few pike here and there, but nothing to get excited about. I never really went too hard, but pike were always in the back of my mind.

Last fall for some unknown reason I decided I wanted to try Spinney Mountain Reservoir for pike. I had never been there before and really have no clue why I decided it was time to try it out. I bought a bulldog and a couple of spinner baits and away I went. On literally my first cast I caught a dink pike. It was pretty cool. Managed to catch probably 5 or so that day.

I went up to Spinney 4 or so more times that fall and did pretty decent. The largest pike I caught was 32" on a husky jerk.

This spring I did not fish for pike, mostly just chased walleye. It was a great spring and we caught a ton of fish. Once the front range lakes got too busy with boat traffic I found myself going up to Spinney again. I also  decided it was time to get real serious about pike.

Time to do some more research and gear upgrades. I watched a ton of muskie and pike videos on the tube. I wound up picking up some Buchertails, different spinners, glide baits, swim baits etc. Picked up a really nice swimbait rod rated for 2-10oz lures and a super nice St Croix Mojo Muskie rod rated for 3/4 to 4oz. I put Abu Garcia Revos on both of them with 40# Powerpro.

Now with new gear, information, and renewed resolve I hit Spinney. Fished multiple 14 hour days. Casting non stop all day. I had results immediately. Probably 20 pike under 24", maybe 6 between 24" and 28", and 1 at 33". Its going well, but no true monsters yet. But I know they will come.

Saturday the 22nd I started fishing at 5:30 am. I got one 28" pike on a Storm glide bait about 9am. Then nothing for hours and hours, not even a follow. Around 5 pm I decided to work the points on the south west side. I caught 5 mid size pike right away. I missed what must have been a big one in a little cove leading up to the first point. He left a huge swirl in the water. The wind had picked up and I had some slight mud lines. I was throwing a 500 Buchertail nickel on black. Caught 2 more IIRC, best around 24". Now it was about 6:30 and the wind was blowing pretty good out of the east. I headed to the North west end by the inlet and did a drift over about 13 FOW. 5 minutes in caught about 24 incher. Got him back in the water and maybe cast 3 times and BAM got a good fish on the line. It happens so quick its hard to really remember the details. I know I had the fish for maybe 10 seconds and then he ripped a bunch of drag out and I thought I lost him. The fish then went and buried himself in the weeds. I winched him out and fumbled with the net. Of course the net hung up on everything, but I still managed to net the fish.

Maybe 2 weeks ago I spent some time going over my plan for dealing with a big fish. I figured out how to set up my net so I would not have to hold it. This involves putting one end under the port console and a velcro strap holding the hoop to a handle on the gunwale. I also bought a phone mount that sticks to the windshield of the boat and found an app to constantly take photos until stopped.

After I got the fish netted and the net secured I went to work on getting the fish unhooked. The fish did multiple death rolls in the net and had the hook and net completely tangled. There was no way I would be able to get this fish untangled and unhooked before it died. Thankfully after watching a Youtube video by Todays Angler I bought a heavy duty pair of hook cutters. I used the hook cutters to cut the treble hook away from the rest of the lure. This freed the pike from the giant tangle. I was then able to get the hook remnants and lure out of the net and get the pike situated so he could relax and breath.

As soon as I got the fish sorted I put my phone in the mount and got it taking photos. I pulled the fat pike out the net, got a few picks, bumped him, 35". I put him back in the water and held him next to the boat for about 30 seconds, then he kicked off and went back to the depths.

I could not be happier. All the planning and research had put me on this fish and had me prepared and informed on how to safely deal with him. The fish and myself are not much worse for the wear.

In Colorado 36" and over is a Master Angler for pike. I missed it by one inch. I'm actually happy with this. I feel like a true Master Angler pike should take more time, and I'm more than happy to keep up the hunt. 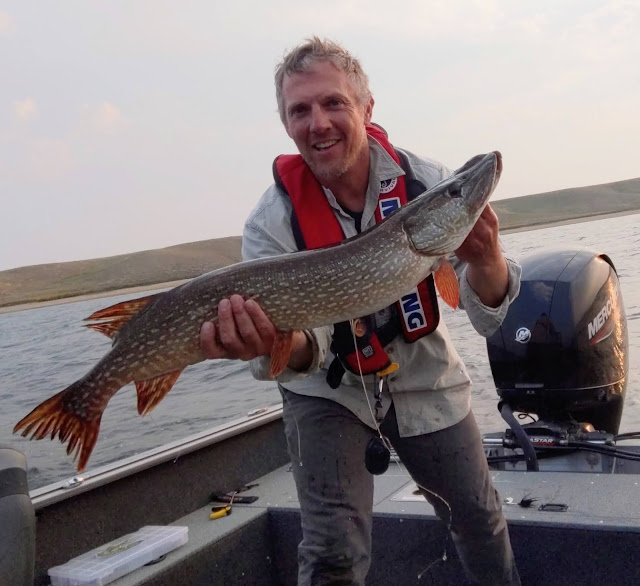 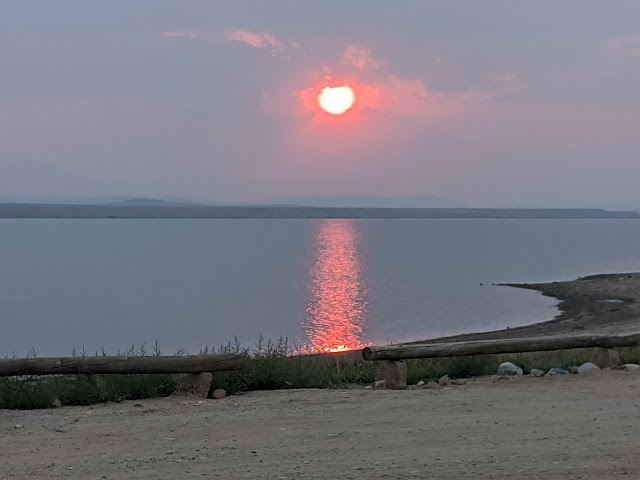